Today, I encountered topacio althaus for the first time. She regularly sets up a small table and typewriter at our local farmers market, with a sign asking for a topic and a price, promising a poem at the end of the transaction.

My sister-in-law approached ms. althaus with a financial offering and a suggested topic of our young children: brother and sister and cousin, one of them a newborn, one three, one four.  Here now is the poem that resulted: 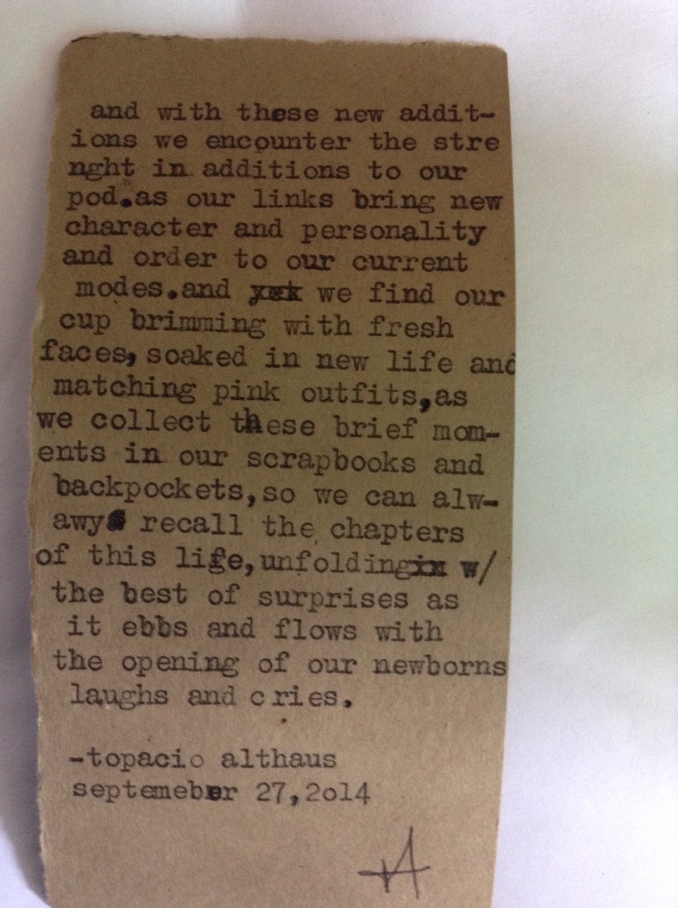 I too took up the challenge of the topic and created the following on my phone:

Three
Three wee ones
Some whipping like warm summer wind
Through the forest of ancient wrinkled calves and knees
Saturday’s lumbering farmers market shoppers
One sleeping, mouth gaping, chirping like a settling bird
Three
Three!
Weeeeeee!
Bound by blood
Sister brother cousin
Georgia in her mother’s arms, three weeks old
Isaac, three plus one, so four, patiently enduring the face painter and stares from tiny cousin Merryn, three
She who is eager to run and play more before his batman cheek is done
Three!
Bound forevermore by this memory
The warm early autumn morn
Among those busy being old, shopping, and nearly born

I made no money.

A good day for poetry.

In the wonderful afterglow we all seek
His eyes open seeing nothing, seeking nothing
He half-whispers to her
I wonder if I could count all the stupid things I’ve said.
Tonight?
He chuckles. In my life.
Impossible.
I remember more of those moments than anything smart I’ve ever said.
You must have said something smart tonight.
I don’t remember.
You must have. I’m here aren’t I?
You’re sweet.
Why worry about this now?
I’m curious. I like statistics.
It seems a waste, dwelling on your shortcomings.
Yes but that’s just what comes naturally.
I know other things that just come naturally.
You’re dirty.
How many women have you slept with?
12.
12.
Now.
I complete the dozen.
He smiles.
How many have you kissed?
Well. Let me see. Middle school and high school were quite busy.
Really?
I was pretty kissable.
But not as…
Fuckable? No. I’m OK with that. I don’t need, I haven’t needed volume, you know? Sex — making love is the most of myself I can give, the most open. This is exactly who I am in the moment I feel the most good, the most me, and this is how I express that joy. This is how I express myself. Only a few should see that.
Only a dozen?
Yes.
That sounds about right
I’m not even going to ask you…
I’m not even going to tell you.
What was your name again?
They hold their smiles until an acausal connecting principle, as yet undefined, compels them to neutrality.
And there they remain, silently, until sleep consumes them.